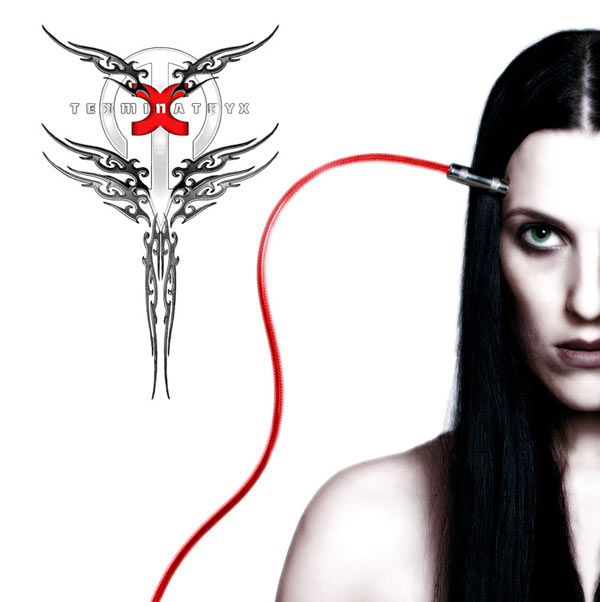 The Terminatryx self-titled debut album was released on CD in May 2008 through ENT Entertainment, South Africa
- distributed by IRIS (cat. no. CDENT 010), and for the first time as download on CD Baby in August 2012.

The Terminatryx sound is a unique one in the South African musical milieu with the combination of eye-catching and
provocative vocalist Sonja Ruppersberg and the music of extreme music veteran Paul Blom (V.O.D, F8, and SAMA winners
K.O.B.U.S.) blending into an Industrial-Metal soundscape rarely found in this country.
In addition there are many musical elements subtly filtering through across the diverse songs, from Alternative-, Hard Core-
and Gothic elements, to Electronic-, Dark Wave- and Punk hints, as well as movie soundtrack moods.

From the start Terminatryx never attempted to sound like anyone out there, developing a flavour all their own with inspiration
coming from cinematic moods rather than other musical references.
With thsi debut album in 2008, Paul and Sonja was joined by Patrick (guitar) and Ronnie (drums) to solidify a full unit of sonic intent.

The undercurrent of the fusion-, symbiosis- and corruption of man & technology is illustrated and supplemented with subjects
ranging from socio-political issues, individualism & independent thought, consumerism, and a critical tirade in Afrikaans, to a
love song alternative, biological- and viral infection, alien visitation, instrumentals and more.

With a natural aversion to cheap commercial sentiments and a blind consumer society, Terminatryx is truly a unique South
African audio adventure, looking at the world with a satirical eye as they take the listener through a juxtaposed range of sonic
intensity and calm, merging technology with the organic in a David Cronenberg vs. H.R Giger trip.

Produced by Paul, the track elements of this self-titled debut were re-recorded in February 2008 at Flamedrop Productions
(with many of the original segments which were recorded since 2003 retained).
All of the songs are original creations with Sonja and Paul also acting as executive producers.

The album cover pictures were shot by Graham Abbott (of One Productions), with concept, design, art-direction & post-production by Paul Blom.

The video clip "Midnight" and a web link are included as an enhanced CD segment on the album.
The video features clips from F.W. Murnau’s silent German classic "Nosferatu".
TERMINATRYX also created an original soundtrack for Nosferatu with collaborators (Simon Ratclife, Sean Ou Tim, Matthijs Van Dijk,
Francois Blom), performed live to the screen at the 2006 South African HORRORFEST Film Festival, as well as Oppi Koppi in 2009 (a DVD of which was released in October 2008).
This collaborative project is now known as The Makabra Ensemble.

The "Midnight" video clip (and others) are also at the www.YouTube.com/Terminatryx channel.
Three "Midnight" video versions can be found here, with either the new audio track or the older demo version, as well as
The Awakening's remixed version (as it appears on the "Remyx v 1.0" follow up album).

Album launch shows happened in Gauteng in May 2008, and Cape Town on the 4th of July (at the Labia Theatre beneath the
big screen, with a synced-up video backdrop, and followed by a premiere sneak preview of the werewolf movie Skinwalkers).

In a televised talent show-, and mock reality drenched commercial media decline, Terminatryx is not merely a breath of fresh air,
but a long awaited new direction out to rattle the cage just enough to make a saturated public stand still and realize there's more
out there than which they are being fed.

Hear or buy the CD / download at the Bandcamp player link below.
(also available on CD or download from iTunes, Amazon mp3, CD Baby, OneWorld.co.za, directly from the band and selected South Africa stores)

1. Venus Rising
This instrumental opener crashes in with a fusion of Industrial beats, loops and Metal guitars, setting the scene for an exciting ride.

2. CONsume
Taking a dig at the ludicrous consumer society in which humanity has trapped itself, here its absurdity is reflected back at the listener, often in a satirical way.

3. Virus
The song explores the view that mankind can be seen as a virus on planet earth, while referencing both the hazards of organic human viral infection as well as that in cyber space, and how they relate (illustrated with the blending of a heart beat and modem connection in the intro).

4. Midnight
Born from vocalist Sonja's active participation in the Cape Town Gothic community, this is her love letter to an ever shrinking sub-culture (all with a vampiric slant). After a wolf's howl and the hypnotic rolling beat is introduced, a German nursery rhyme narration by guest Christina Storm opens the song (often compared as being Marilyn Manson-esque).

5. SleepWalkers
A condemnation of self-proclaimed leaders (political, religious and others), with only their own interests at heart. The song has a trippy feel. Original guitarist Tom Somers' closing lead segment was retained.

6. Tabloid Android
After a highly misinformed and incompetent newspaper article on Terminatryx (the so-called writer even going so far as to alter the band's name!), it sparked this song which attacks bogus journalism and tabloid stupidity.

7. Symbionik
A pulsating electronic instrumental that could be the open credit music to an as yet un-produced futuristic battle video game.

8. We Come In Peace
The song takes a look at the possibility of alien life and their potential motivations for visiting earth, and what their perception
of our stupid little species might be.
Another lead guitar piece by original guitarist Tom was retained from early demo recordings.
(While mixing the track with Simon Ratcliffe at Soudn & Motion Studios, Sonja started feeling very ill - her apendix ruptured
and was off to the emergency room for emergency surgery!)


9. Up To You
One of the more pacy tracks on the debut album, it is a rallying call for independent thought, a sense of self, individuality and living with the consequences of your decisions.

10. The Love Song
A tongue in cheek anti-love song with an explosion of expletives.

11. Siek + Sat
One of the more intense songs on the album, this is a free-flow tirade against a list of things that pisses many of us off.
The lyrics are in Afrikaans, one of South Africa's indigenous languages. Special guest Jenna Bird added a few well-placed notes of piano.

12. Absinthium
This ethereal instrumental closes the album off.
Features fretless bass guitar by Paul, and special guest Simon Ratcliffe on upright bass and a variety of exotic flutes, adding an organic emotional element to the predominantly electronically programmed backbone of the track.